Skip to Main Content
It looks like you're using Internet Explorer 11 or older. This website works best with modern browsers such as the latest versions of Chrome, Firefox, Safari, and Edge. If you continue with this browser, you may see unexpected results.

He is the “old head” of the XJTLU Student Union and leads the SU to become “Club of the Year” during his presidency. He is the winner of Academic Excellence Awards, whose SURF project also wins the title of “IBSS Cluster Winner”.  In the university, he is an optional course student lecturer, an ILEAD guest speaker, and the representative of the Academic Board.

Plus, he is a member of Translators Association of China, UNLPP certified translator with years of experience; a holder of BEC Higher and a guest lecturer of Business English in many enterprises. He has deep love for life and has a wide range of interests; as a foodie blogger and caffeine addict, he appreciates food aesthetics and latte arts.

How can we achieve the balance of study, club, work and life in the university and become a "Slash” Youth? 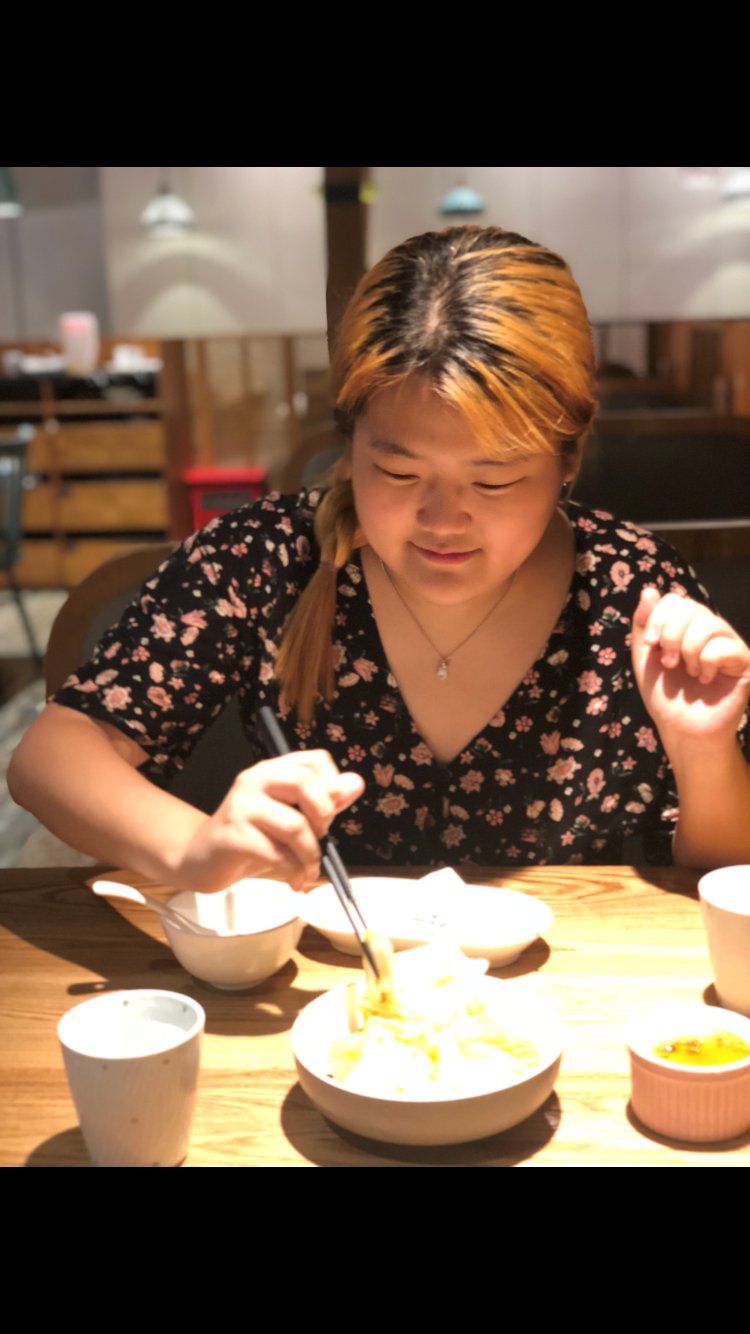 Lecturer of ‘Korean language and culture with k-dramas’

What do you think of when we talk about romantic Korean dramas? Is it exquisite makeup, or stylish clothing? Is it barbecue, ramen or spicy fried rice cake?

K-dramas have always been popular. ‘It is snowing. How can I live through the day without fried chicken and beer?’ Cheon Song-Yi’s pet phrase once became a hot topic among young people, reflecting the great charm of K-drama.

This time, the South Korean girl will bring you a feast of K-dramas, guiding you to the world of Korean culture!

The Art of Language

He had never received professional training in hosting before. After a series of experiences, he grew up and reaped a lot experience in hosting. As one of the speaker XJTLU team in Enactus 2016 China’s Social Innovation Competition, he led the team to enter the national final with the performance of No.1 in preselection competition and No.2 in East China Competition. He is good at communicating with others and hope to help someone who are not very communicative. Hosting and speaking are all the art of language. If you want to improve your ‘EQ’, have the confidence to speak freely and face your fear in coming up to the podium, I hope I can show you some of the ways to grow out of your comfort zone.

Everyone’s life path is unique. Apparently the universe has something planned for me: writing new chapters to my story the moment when I feel unwilling to be a nerd.

The dynamic wave of life did not hit me by surprise: from Sales Commissioner to Product Manager, from Marketing to Overseas Exchanges, from Work to Entrepreneurship, The perfect transformation of various roles is realized.

Either doing something or nothing, every choices must be based on all your experiences in the past. There are millions of paths to choose in life. That’s why I have something to share with you.

Spirit of independence, Will of freedom

People step on different paths due to different choices. Unique character is formed due to distinct scenery on one’s own path.

He is going to share his path, on which he walked through Bosch, Deloitte, CPA Australia, IBSS, Tesla, along with insistence, sense, and affirmation.

Be independent, and insist on the attitude of non-conformity. Be free, and always follow the right direction. The destination of the path is who you want to be.

He won the Junior World Memory Championship several times and has broken several world records. He is also the champion in the TV show “Super Brain” in 2016 and 2017.

He insists that hobbies are the best teachers and we should put the most effort in achieving our goals.

Want to hear something different about memory? Want to know how memory changed his life? Come and find out!

She is an excellent explorer, she has been to more than a dozen countries: diving in the Maldives, cycling along the Lake Baikal, road tripping in North Coast of Spain, island hopping in Japan, having fun in Singapore Art Museum… an excellent travel partner.

She spent a whole year exploring inspiring individuals and their stories, committed to make TED better.

Her rapid academic progress and scholarship earned reflect the evolution of learning methods and ways of thinking. How did her experience change her performance from 50% - 80%?

Listen to how she completely counterattack her underachieving grades, joining a club and travel the world! She certainly has an exuberant university life that we all are dreaming of.

The 24th “Living Library” was a Success

On the 23rd October at 6pm and the next day, 24th October at 2pm, the XJTLU Library has organized two sessions of “Living Library” in the Library’s interactive room, R830. The activities invites various guests from different fields to talk about their different life experiences and life styles. The guests are Wen Haoming, Founder of Tourist Consulting Co.; Xiang Xixing, a freelance interpreter and food blogger; Wang Haochuan, the presenter of the XJTLU opening ceremony in 2016; Chen Zhiqiang, a freshman and the champion in the TV show “Super Brain”; Ho Hao, a planner of TEDxYouth; Aro Han from South Korea, and Chou Mengda, a 2018 alumnus.

The activity is divided into two parts. First, each guest tells his or her own unique experience to all the students in turn. Then the students can choose to sit near the guest that interest them the most, ask questions and have in-depth exchanges face to face. Readers, guided by living books, read wonderful chapters of the “living book”, exchange experience in their study and life, and are fully amazed and touched. At the same time, dozens of good books recommended by the guests are also displayed in the room and the readers can read or borrow them freely.

Among them, a “living book”, Wen Haoming’s successful transformation from a student to a CEO of a travel company has received many applause. Sticking to his life principle, “say no”, Wen Haoming worked as the global ambassador for the English First (EF) in the Asia-Pacific region. He then took a gap year and worked for a visa company and won as the best sales person. He later eventually started his own travel company. He pointed out the three biggest moments on the road to entrepreneurship: a resignation, a family gathering, a working meal. He believed that the confirmation of his boss, the support of his family, and the call of his dreams were indispensable driving forces on the road of his entrepreneurship. Readers marveled at his fearlessness, admired his unswerving foresight and determination, and were influenced by his courage and perseverance to try and break through.

At the same time, Xiang Xixing , who is the star in the club, studying, translating and self-media, share with us how to effectively manage time to achieve balance between study, work and life. “Seize the moment while you can”: in the most confusing time in high school, he decided to stay in Germany for one year; Due to his love for translation, he joined the Chinese Translation Association and became a student lecturer in the English-Chinese translation selective course in XJTLU; as a food blogger, he has done a lot of research on Latte.

Simultaneously, Wang Haochuan tells the readers from his own experience that public speaking and talking are the art of language, and he also offered a few suggestions on how to speak confidently which has benefited his readers.

The last “living book” is Chen Zhiqiang, a freshaman famous among many XJTLU students. The innocent boy now has grown to be a handsome young man. As Chen Zhiqiang laughed ”I am no longer the fat little 14 year-old boy”. In his sharing session, everyone talked and laughed. He was labelled as “King of the Brain” back in junior and senior high schools but he did not have a good relationship with his classmates, and express his longing for interpersonal communication. At the same time, he stressed that his ability is not innate. Instead, he worked from scratch, under the guidance of self-interest, step by step, and eventually broke the world record. He said, “I am an ordinary person. My ability and academic performance are two different things. Don’t belittle others just because of my achievements in the TV show”, he said sincerely.

After the event, Ma Xin, a Year 2 student majoring in economics commented that the “Living Library” made him meet more interesting people. He can relate to their study and life experiences. “today’s two hours is really worthwhile” he added. Siyun Wang, a Library staff from User Service Division said that the “Living Library” event allows readers to acquire unique knowledge. By “borrowing” a living person to talk to, readers gain better insights, make friends and get a completely different reading experience from books. This is a very meaningful activity and the library will continue to organize it in the future. 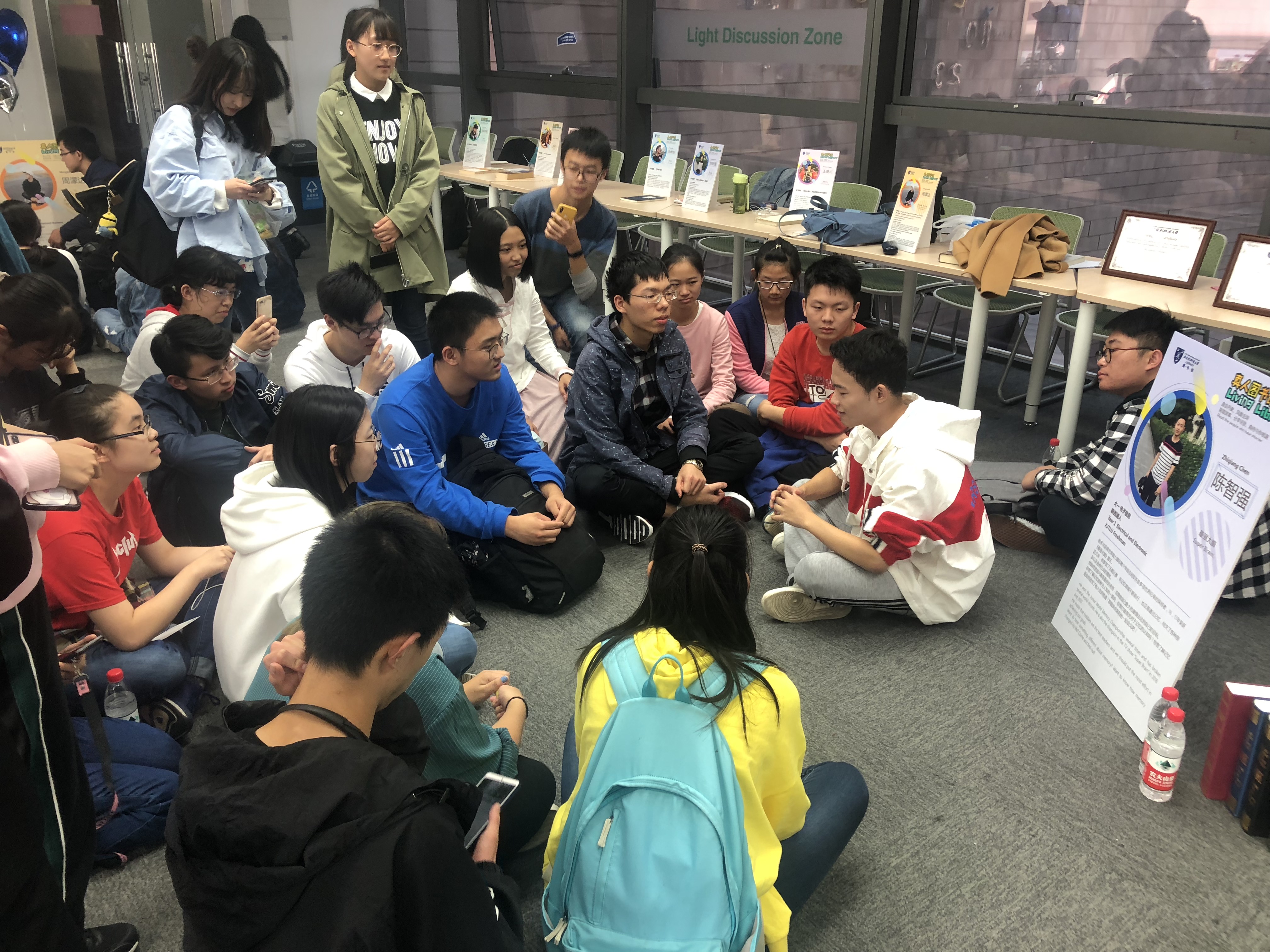 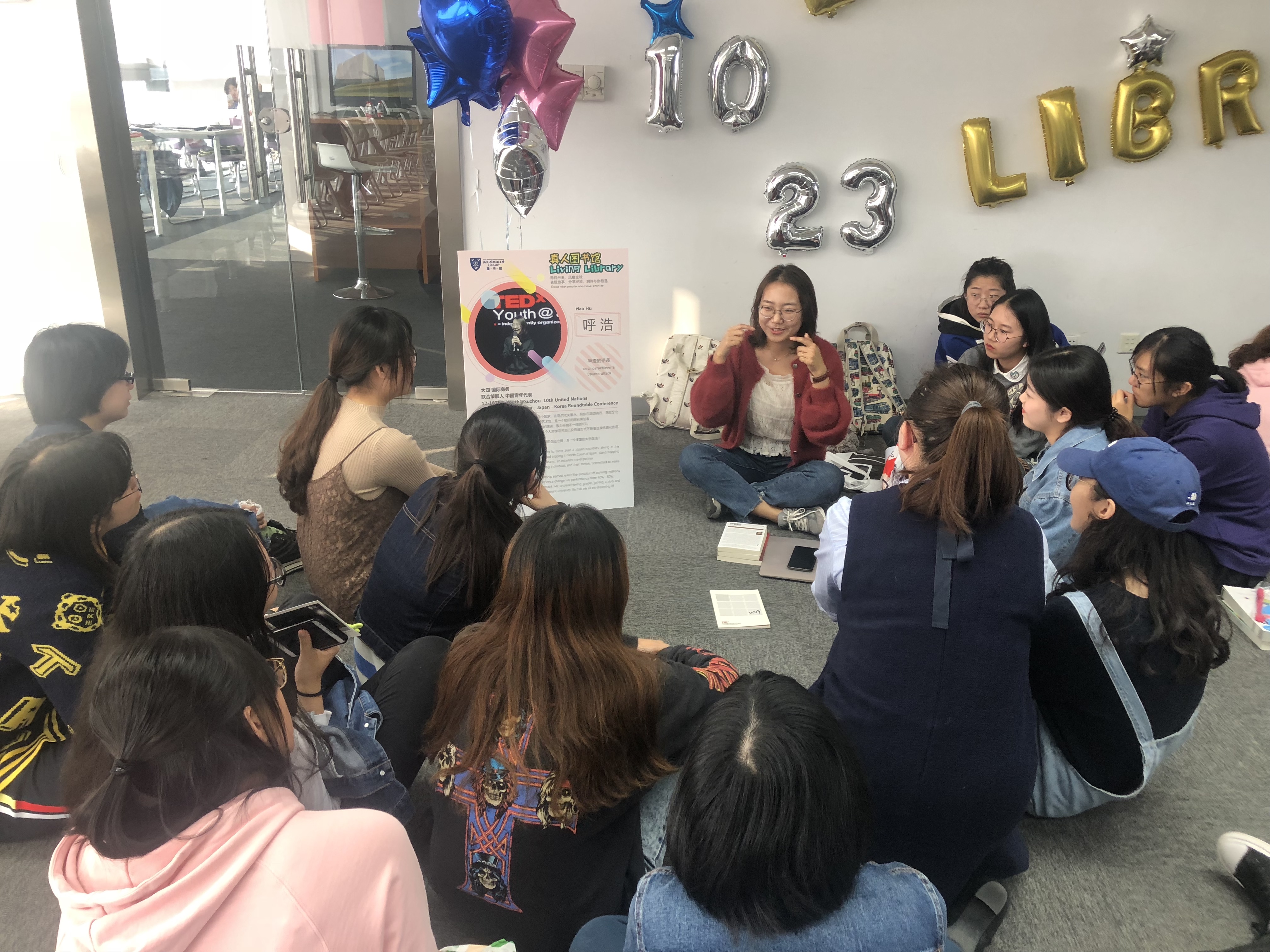 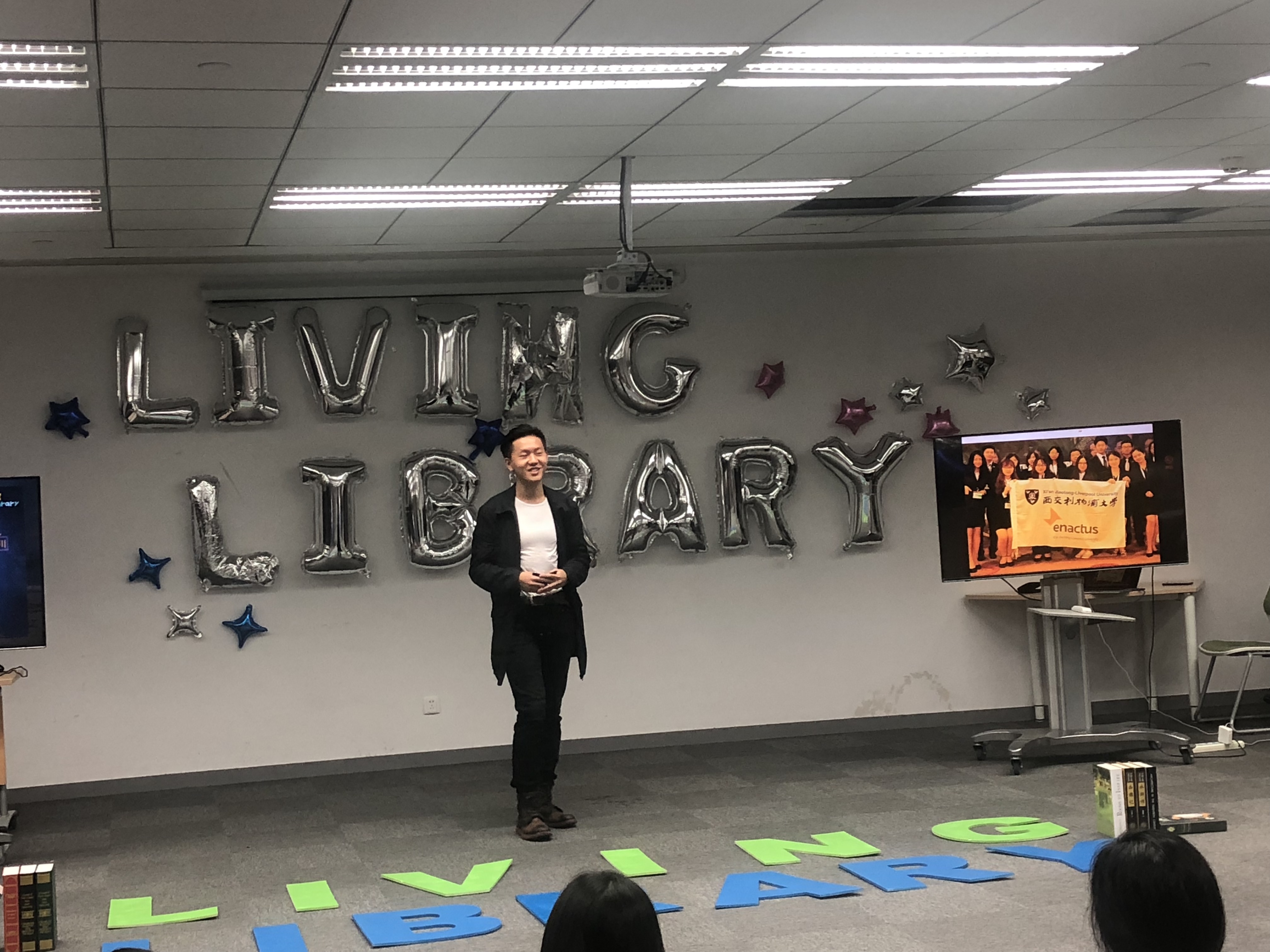